In the previous post we saw how krishNa was already winning over the many demons, when he was just a small baby. Sometimes one would wonder if krishNa ever acted like a baby, given that He was the parmAthma himself. krishNa with his leelais has always enchanted jIvAthmAs for generations.

After the incident with chakatAsura, life was back to normal in gOkula. yashOdha and nandhagOpa were enjoying krishNa, along with balarAma and rohiNi dEvi. krishNa was growing well, starting to crawl and play with things around, knocking things in his way.

One day, as yashOdha was working in the kitchen and krishNa joined her. Seeing krishNa,  she lifted him and was playing with him. In order to do some work, she put him down in the backyard for a moment. At that same moment, it started raining heavily with the wind blowing. Yashoda came hurrying back, to take krishNa inside, but before she returned, a very strong wind, shaped like a funnel blew and took krishNa in it. yashOdha cried out loud that a tornado had taken krishNa away. Make the puzzle below to see how krishNa was carried away by a tornado! 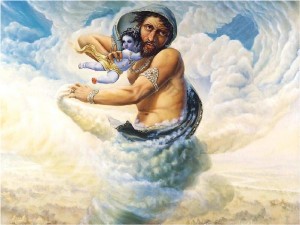 This asura, named tirNAvartha, carried krishNa to the upper layers of the atmosphere. His plan was to go very far away into the sky and then throw krishNa down to earth and end krishNa. As triNAvartha went higher and higher, he felt a bit breathless. The breathlessness kept increasing and he also found krishNa to be heavier. It seemed as though krishNa was growing bigger and heavier and the hands of krishNa were strangling tirNAvartha. In no time triNAvartha could no longer breathe and dropped dead, heavily near gOkula. The search party in gOkula heard this very loud thud and came towards the source of the sound. There! They found krishNa happily laughing and playing on this asura. Make the puzzle below to see the scene described above. 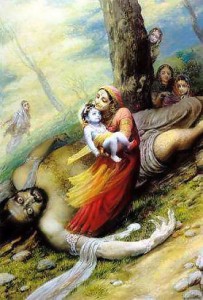 As krishNa was growing up, there were more asuras that kamsa kept sending.

aghAsura was an asura who took the form of a snake. aghAsura’s idea was to lure krishNa and his friends by keeping his mouth open wide. Once inside, aghAsura could just close his mouth and digest the kids, along with krishNa. aghAsura conveniently took his place in an area within the dense forest, where kids would always come exploring. As aghAsura expected krishNa’s friends wandered inside and stayed exploring aghAsura’s internal parts for a long time. krishNa looked for his friends for a long time and then came into aghAsura’s mouth too. Once krishNa went inside a bit, aghAsura closed his mouth and everything became dark. krishNa understood what was going on and appeased his scared friends. Eventually, krishNa punched through aghAsura’s skin and saved his friend. Make the puzzle below to see how aghAsura was. 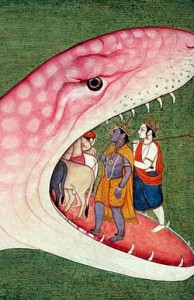 Like aghAsura, there was another asura, who came in the form of a crane and lured krishNa and his friends inside his beak. krishNa split open the beaks of this crane formed asura, called bakAsura and saved his friends and himself. This act of krishNa splitting the crane’s beaks is very celebrated by AzhwArs and pUrvAchAryAs. Once instance of this incident as celebrated by AndAL is:

Here AndAL recalls the incident of krishNa splitting open the crane’s beak, as one of the greatest acts of krishNa as a child. The story goes that bakAsura stayed on the banks of river yamuna and swallowed krishNa along with his friends. krishNa, once inside krishNa burnt the heart of bakAsura. Unable to bear the heat, bakAsura spit krishNa out and try to win over him, with his beaks. Seeing that bakAsura was not going to stop his fight against him, krishNa splits up the beak of bakAsura and finishes him. Make the puzzle below to see bakAsura. 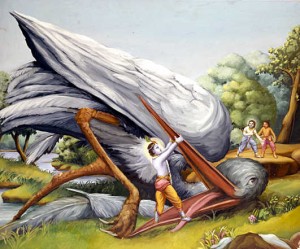 Let us enjoy more stories of krishNa’s childhood in the next posts.

Full series can be viewed at http://pillai.koyil.org/?p=593