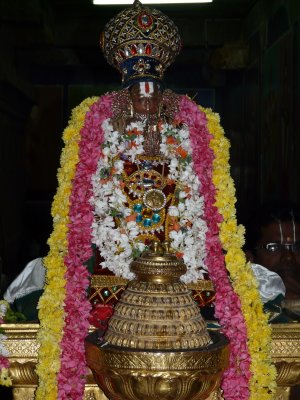 ANdAL pAtti takes parAsara and vyAsa to thiruveLLaRai temple. They board a bus outside srIrangam rAja gOpuram.

parAsara: pAtti, while we are in the bus, can you tell us about the fourth AzhwAr?

ANdAL pAtti: Sure, parAsara. I am happy to know that you prefer to speak about AzhwArs during the journey.

parAsara and vyAsa smile at pAtti. The bus starts from srIrangam.

ANdAL PAtti: The fourth AzhwAr is thirumazhisai AzhwAr, he was fondly called as bhaktisAra. He was born on thai month magam nakshathram in thirumazhisai near chennai to bhArgava muni and kanakAngi. He was the AzhwAr who lived the longest in this world. He lived for almost 4700 years.

parAsara and vyAsa drop their jaw in astonishment and ask ”4700 years!!!”.

ANdAL pAtti: Yes, He traversed through most of the different philosophies before he met pEyAzhwAr.

vyAsa: Oh! What happened after they met?

ANdAL pAtti: pEyAzhwAr taught him about perumAL in detail and brought thirumazhisai AzhwAr into srivaishNavam.

ANdAL pAtti: He had particular interest in knowing about antharyami, the perumAL who exists within us and he was deeply devoted to kumbakONam Aravamudhan, so much so that perumAL exchanged his name with AzhwAr and they came to be known as ArAvamudhAzhwAr and thirumazhisai pirAn.

parAsara: Wow, pAtti. Looks like he had been very close to perumAL.

ANdAL pAtti: Yes, he had been. Once in a village, when he was traveling, he visited the temple in that village. The perumAL was so fond of him, he started turning towards whichever direction AzhwAr was moving. Similarly, ArAvamudhan emperumAn was so fond that he listened to him politely and started to get up from his reclining posture when AzhwAr asked him to do that.

parAsara and vyAsa eyes pop out in astonishment and ask “What happened then pAtti?”.

vyAsa: Oh! that is very nice pAtti. One day we should go and visit this perumAL.

ANdAL pAtti: Surely, we will go some time there. He stays there for a long time. He throws all of his works into Cauvery river and retains the only 2 prabandhams – thiruchchantha viruththam and nAnmugan thiruvanthAdhi. After that he finally ascends to paramapadham and continues to serve emperumAn in paramapadham eternally.

The bus reaches thiruveLLaRai. They enter the temple and have the dharsan of thAyAr and perumAL.