periyAzhvAr is inviting everyone to come see the soft and beautiful krishna, whose 9 toes denotes the 9 different gems, also called navarathnams, and then 10th toe is coated with gold. periyAzhvAr is comparing the toes of krishNa to the marudhANi (henna/mehendi designs) that people use to decorate hands and feet and is saying that krIshNa is perfect in every way, inviting everyone to enjoy him, in his beautiful cradle. 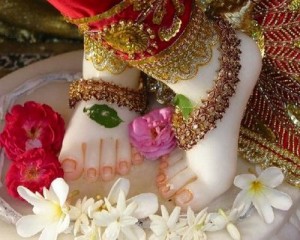 krIshNa was not only celebrated by people in gOkula, but also blessed by the many different Gods, as described in the mANikkam katti padhigam, sung by periyAzhvAr.

While krIshNa was celebrated in gOkula, kamsa was still very frightened for himself and decided to end the life of all the children born in the past 2 weeks, around the time krIshNa was born. kamsa started to gather his evil forces and sent them in all directions. One such evil force was pUthana. pUthana was a female asura who would turn herself into a beautiful damsel and try to feed krishNa with poisoned milk, smeared on her breasts. Make the puzzle below to see how beautiful pUthana was when she tried to attract the kids to herself. 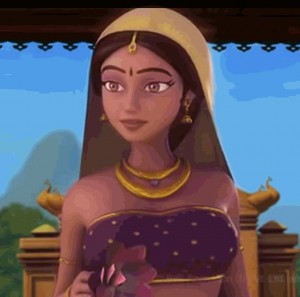 This beautiful pUthana, took away krIshNa and started feeding him milk. krishNa, the all knowing sarvEshwaran not only sucked the milk from pUthana, but also her life, mainly because pUthana came all the way to gOkula, just to give krishNa something. krishNa has the power of knowing what was in pUthana’s heart and therefore, took everything that pUthana could offer – that is her life! Make the puzzle below to see the final form of pUthana and how she was taken by krishNa. 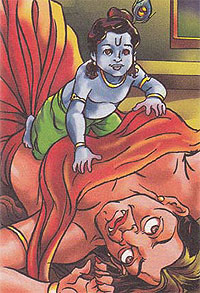 pUthana is one of the most popular asuras, that have been sung by our AzhvAr’s. Every AzhvAr has reference pUthana, mainly because she shows us that if you want to give something for krIshNa, krishNa will take everything that we have and make us his. One of the phrases describing the pUthana episode in periya thirumozhi is –

Meaning, krishNa completely sucked out pUthana’s life, without a second thought or giving her an opportunity to escape.

Even though kamsa knew that nandhagOpa’s son krishNa was causing some mischief and had killed pUthana, kamsa kept sending more asuras, hoping that one of the asurAs could overpower this mere kid. The next in line was chakatAsura. chakatAsura came over to gOkula, changed himself into a wheel and hid near krishNa’s cradle. chakatAsura’s plan was to topple over krishNa’s cradle and crush him with his own wheel form. However, all krishNa did was to kick chakatAsura to end him. Make the puzzle below to see how krishNa kicked chakatAsura and won over him. 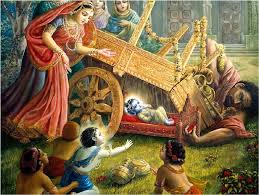 We will continue enjoying krishNa’s childhood in the upcoming posts.

Full series can be viewed at http://pillai.koyil.org/?p=593