vyAsa and parAsara goes to ANdAL pAtti and ask her to continue with the AzhwAr stories.

ANdAL pAtti: vyAsa and parAsara! Today I am going to tell you about a king who is an AzhwAr. 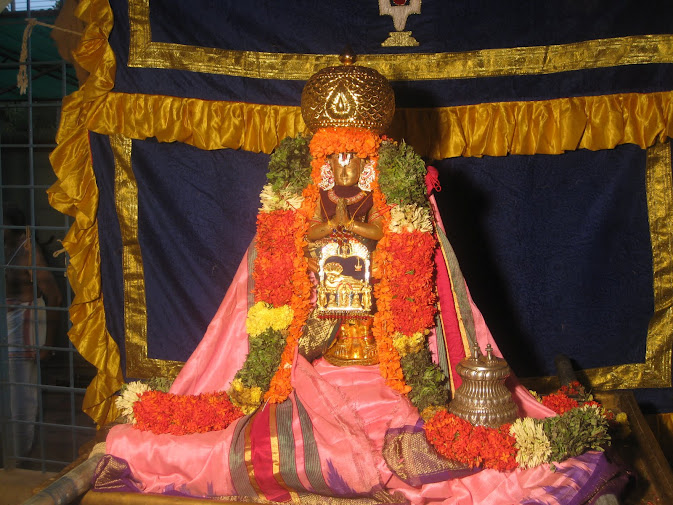 vyAsa: Who is that pAtti? What is his name? when and where was he born? What are his special qualities?

ANdAL pAtti: His name is kulasEkara AzhwAr. He was born on mAsi month punarpUsam nakshathram in thiruvanjikkaLam which is located in kEraLa. He was born in a kshathriya family.

parAsara: What does kshathriya mean pAtti?

vyAsa: Oh, just like our rangarAja, who rules us and protects us in srIrangam.

ANdAL pAtti: Yes. Our perumAL is the king for everyone. But each region is ruled by a king and these kings are greatly respected by the local people. Coming back to the history, As he was born in kshathriya family, he was feeling that he was the controller, fully independent, etc. But by the grace of srIman nArAyaNan, he became fully realized that he was fully dependent on perumAL and developed great taste to listening to the glories of perumAL and also taking care of the devotees of perumAL.

parAsara: pAtti, I remember you telling that we should be like madhurakavi AzhwAr in serving devotees of perumAL. Was he like that pAtti?

ANdAL pAtti: Very nice parAsara. Yes. kulasEkarAzhwAr had great attachment to srI rAmAyaNam. See, in our sampradhAyam “srI rAma” is lovingly called as “perumAL“. Due to kulasEkarAzhwAr’s great attachment towards srI ramAyaNam and srI rAma, he himself becomes to be called as “kulasEkara perumAL”. He would listen to srI rAmAyaNam every day from great scholars and be immersed in the incidents. Once, when he heard that srI rAma was attacked by 14000 rAkshasas, he became disturbed very much and called out for his army to go and assist srI rAma. The devotees of perumAL would then pacify him and tell him that srI rAma had already defeated the rAkshasas single handedly.

vyAsa: How did he rule the kingdom pAtti if he was fully engaged in hearing about perumAL?

ANdAL pAtti: Yes. That is a very good question. He was unable to focus on the kingdom. His ministers planned to eliminate his attachment towards bhAgavathas who are devotees of perumAL. They stole the necklace of perumAL from his temple in the palace and told him that it was stolen by the bhAgavathas. He did not believe the words of the ministers. It was an ancient practice of proving ones words by putting their hand in a pot which has snake in it. One must be very confident on truth and brave to do this. He asked them to bring a pot which has snake inside it. He boldly put his hand inside the pot and proclaimed that the bhAgavathas are innocent.

parAsara: That is very nice pAtti.

vyAsa: What is the relationship with srI rAma and periya perumAL pAtti?

parAsara: Oh! Very nice to hear this pAtti. We did not know this connection between perumAL (srI rAma) and periya perumAL before.

ANdAL pAtti: So, kulasEkara AzhwAr also had great attachment towards srIrangam and periya perumAL. He wanted to visit srIrangam everyday from his kingdom and would leave from there. But his ministers would stop him by giving some reason or the other so that he can continue to rule the kingdom from there. Eventually, he gave up his kingdom and reaches srIrangam. He sings perumAL thirumozhi in glorification of emperumAn and stays in srIrangam for some time. Finally, he leaves from this world and reaches paramapadham to serve him permanently.

vyAsa: pAtti, the more we hear about AzhwArs, the more we know about perumAL since their lives  are fully focussed on perumAL.

ANdAL pAtti: Yes. We should also focus our lives towards perumAL and his devotees. Now, let us go to kulasEkara AzhwAr sannidhi and have his dharsan.

vyAsa and parAsara: Sure pAtti. Let us go now.