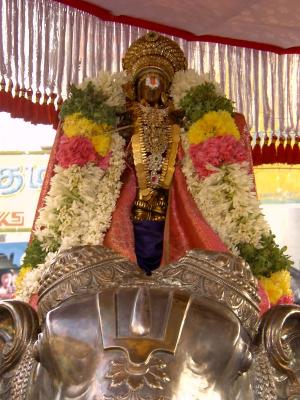 On a beautiful Sunday morning, ANdAL pAtti sits in the pyol (thiNNai – veranda) outside her house and makes garland for perumAL. vyAsa and parAsara come and sit on the pyol next to ANdAL pAtti . They both watch ANdAL pAtti curiously.

vyAsa: What are you doing pAtti?

ANdAL pAtti: Making a garland for perumAL, that reminds me of a couple of AzhwArs? Would you like to hear about one of them now?

parAsara: Oh sure pAtti. We are eagerly waiting for that.

ANdAL pAtti: That’s like my boy. Then let me tell you about periyAzhwAr. He was born in Ani month swAthi nakshathram in srIvillipuththUr. He was also called as pattarpirAn. He used to make garlands for vatapathrasAyi emperumAn. One fine day, the king who ruled the pAndiyan kingdom, threw open a challenge to the scholars. He announced that he will award a bag full of gold coins to anyone who could establish who is the supreme god.

vyAsa: That would have been very difficult, isn’t it pAtti?

ANdAL pAtti: It wasn’t so for periyAzhwAr. Due to his bhakthi and the mercy of perumAL, he went to the king’s court and established that perumAL is the almighty through vEdham. The king was so happy that he gave periyAzhwAr the prize money and sent him through the streets of Madurai on a royal elephant.

parAsara : That would have been a sight to watch, pAtti.

ANdAL pAtti: Yes parAsara, that was. And that is why perumAL himself came down from paramapadham riding his garuda. Even though periyAzhwAr was riding on top of an elephant, he was ever so humble and was worried about the safety of perumAL. So he sang thiruppallANdu to ensure perumAL is protected. That’s how he came to be known as periyAzhwAr. He also sang periyAzhwAr thirumozhi.

vyAsa: Oh. Yes pAtti – pallANdu pallANdu sounds familiar. That is what is recited everyday in the beginning. We have heard it in the temple.

ANdAL pAtti. Yes, you are right vyAsa. periyAzhwAr‘s thiruppallANdu is always recited in the beginning and the end too.

parAsara: That’s nice pAtti. We will also learn it and start reciting it in front of perumAL.

ANdAL pAtti: I’m sure, you will start doing that very soon. By the way, he was also the father of ANdAL, the one who sang the most popular thiruppAvai. Will tell you more about ANdAL later, come let’s go and offer the garland to perumAL.

ANdAL pAtti finishes making the garland and starts towards srI ranganAthan temple along with vyAsa and parAsara to offer it to perumAL.