pAtti : Welcome children. Today we will talk about the next AchAryan, parAsara bhattar, who was the Sishya of embAr and had great devotion towards embAr and emperumAnAr. As I told you children already, emperumAnAr , as a way to express the gratitude towards parAsara and vyAsa maharishis, named the two sons born to kUraththAzhwAn as parAsara bhattar and vEdha vyAsa bhattar. It was one of the three promises to ALavandhAr that he fulfilled. parAsara bhattar and vEdha vyAsa bhattar were born to kUraththAzhwAn and his wife AndAL from the prasAdham that they received from periya perumAL of SrIrangam. 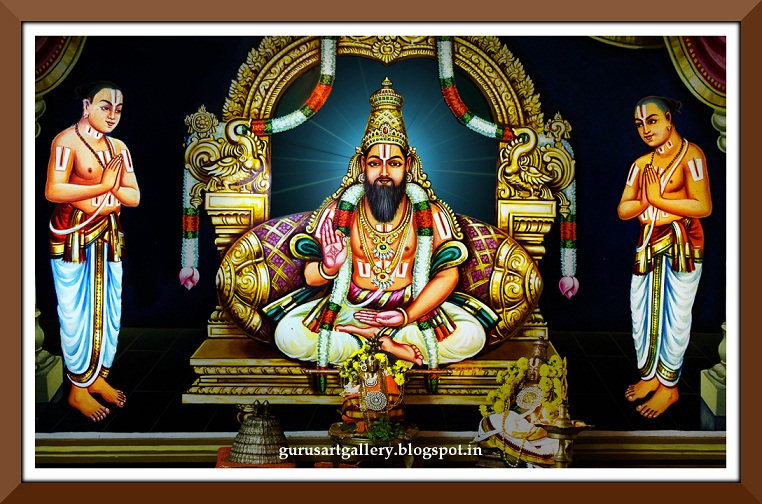 parAsara : pAtti, are we, me and vyAsa, named after these AchAryas?

pAtti : yes parAsara. Children are often named after AchAryas or perumAL so that at least for the sake of calling out the children, we get an opportunity to call out the divine names of our AchAryas and perumAL. This is the exact reason why children must be named after perumAL, thAyAr or AchAryas so that we get to call out the auspicious names and get a chance to think about our AchAryas and perumAL and their divine qualities. Otherwise, in this busy world, who has the time to separately allocate time to just recite the divine names of perumAL and think about Him? But nowadays, things have changed. People go behind fashionable names which makes no sense and also does not remind us of perumAL, thAyAr or AchAryas.

After coming to SrIrangam, AzhwAn did unja vruththi (alms) for everyday food and one day due to heavy rains, AzhwAn could not go out to do unja vruththi. Azhwan and his wife AndAL had to sleep empty stomach. During night, AndAL hears the final naivEdhyam bell ringing from the temple. ANdAL says to emperumAn, “Here, you have AzhwAn, your pure devotee, without any prasAdham but you are enjoying nice bhOgam there”. Understanding this, periya perumAL sends his prasAdham to AzhwAn and AndAL with all his paraphernalia ( due respects from temple ) through uththama nambi. Seeing the prasAdham coming in, AzhwAn is awe-struck. Immediately, he turns to AndAL and asks, “Did you complain to emperumAn?” and AndAL admits her request. AzhwAn becomes upset for insisting emperumAn to provide for their prasAdham. He accepts 2 handfuls of prasAdham alone, consumes some and gives the remnants to AndAL. Those 2 handfuls of prasAdham eventually blesses them with two beautiful children.

aththuzhAy : Tell us some stories about his intelligence pAtti.

pAtti : Once, when bhattar was playing in the street, a vidhwAn named sarvagya bhattan comes in a palanquin. bhattar, shocked to see some one being carried in a palanquin in SrIrangam, a place where great scholars like rAmAnujar were living, goes straight to him and challenges him for a debate. sarvagya bhattan considers bhattar as a child and says bhattar can ask any question and that will be answered by him. bhattar picks a handful of sand and asks how much sand he has in his hand. sarvagya bhattan becomes speechless and says he does not know. bhattar says that he could have just answered “it’s a handful”. Amazed by bhattar’s brilliance, sarvagya bhattan at once comes down from the palanquin and carries bhattar to his parents and glorifies him.

vEdhavalli : That was a smart answer.

patti : bhattar was very shrewd and had great grasping power as a child. When he was very young during his gurukulam time, bhattar was playing in the streets. At that time, AzhwAn comes by and asks why bhattar was playing instead of attending the class. bhattar says “every day they are teaching the same santhai again and again” – usually the same santhai is repeated for 15 days or so. But bhattar could grasp right in the first day itself. AzhwAn tests him with a pAsuram and bhattar easily recites it.

pAtti (Smiling) : Exactly! bhattar was just like his father AzhwAn who had great knowledge and memory power. There were few other qualities of AzhwAn that had come down to bhattar too such as humility and magnanimity. Once a dog some how enters the temple in SrIrangam. Generally during such cases, the archakas of the temple do samprOkshaNam as an act of cleansing the temple. The archakas decide to do a lagu (small) samprOkshaNam. Hearing this, bhattar runs to periya perumAL and tells him that every day he walks into the temple but no samprOskhanam is done then why are they doing a samprOkshaNam when a dog enters the temple. Such was his humility, even after a being such a great scholar, he considers himself lower than a dog. He even says that he would prefer to be born as a dog in SrIrangam than being born as a dhEvan in dhEvalOkam.

vEdhavalli : pAtti, if ranga nAchchiyAr raised bhattar as a child then did bhattar also talk to perumAL and pirAtti like thirukkachchi nambi did with dhEvap perumAL?

pAtti : yes vEdhavalli, you are right. bhattar too speaks with perumAL and pirAtti of SrIrangam. Do you all know that once in a year, the day before vaikuNta ekAdhaSi, on the 10th day of pagal paththu utsavam, namperumAL adorns the nAchchiyAr thirukkOlam? He wears all the jewels of ranga nAchchiyAr and sits beautifully like nAchchiyAr on that day. namperumAL calls bhattar on one such day and asks him if He looks like thAyAr. bhattar, who is always partial towards thAyAr, looks at namperumAL with great affection and love, and says all the alankArams are perfectly fine but the karuNai in her eyes are not to be seen in the eyes of emperumAn. Such was the love that bhattar had for his mother, ranga nAchchiyAr.

Although bhattar had hundreds of followers, who listened to his kAlakshepams regularly and were influenced by his teachings, there were also few people who disliked bhattar. This is very common to great people. This happened even to rAmAnujar. Once, few people who disliked bhattar, started to scold him out of jealousy and hatred. What would you do if somebody yells at you, vyAsa?

vyAsa : I would shout back at him. Why should I be quiet?

pAtti : That’s exactly what most of us , even adults, would do. But do you know what bhattar did? He presented his ornaments and expensive shawl to the person who shouted at him. bhattar thanks him by saying “Every SrIvaishNava should do two things – sing the glories of emperumAn and also lament about his own faults. I got so deeply immersed in singing the glories of emperumAn that I forgot my duty of lamenting about my faults. Now you have done me a great favour by fulfilling my duty, so I should only reward you”. Such was his magnanimity.

parAsara : pAtti, I remember you saying that rAmAnujar instructed bhattar to bring nanjIyar into the sampradhAyam. How did bhattar do it?

pAtti: I’m very happy that you remember it parAsara. Yes, as per rAmAnujar’s divine instructions, bhattar goes to thirunArAyaNapuram to bring nanjIyar in to our sampradhAyam. We have already heard about this place before? Does anyone remember when?

vEdhavalli: I remember. thirunArAyaNapuram  temple was one of the many temples that were reformed by rAmAnujar. rAmAnujar re-enforced the temple administration in mElkotE.

pAtti : Very good vEdhavalli. rAmAnujar brought back selvappiLLai uthsava mUrthy of thirunArAyaNapuram temple from the muslim invaders and restored the temple administration. bhattar goes to the thadhIyArAdhana kUtam (hall where food is served to bhAgavathas) of mAdhavAchAryar (nanjIyar’s original name). He waits there without eating and mAdhavAchAryar taking a note of him, comes to him and asks him why he does not eat and what he wants. bhattar says that he wants to debate with him. mAdhavAchAryar, having heard about bhattar quickly realises this and (since no one will have the guts to challenge him) agrees for a debate. bhattar first uses thirunedundhANdakam and subsequently presents all the relevant meanings from SAsthram to establish the greatness and supremacy of emperumAn. mAdhavAchAryar accepts the defeat and falls at the lotus feet of bhattar and accepts him as AchAryan. bhattar gives him specific instructions to learn aruLichcheyal, etc and teaches him our sampradhAya arthams. bhattar takes leave from him and goes to SrIrangam. As soon as bhattar reaches SrIrangam, he is welcomed in a grand manner. periya perumAL who was eagerly waiting for bhattar’s return, listens with great interest, the entire incident from bhattar. Pleased at bhattar’s victory, periya perumAL asks bhattar to recite thirunedundhANdakam to him once again.

bhattar had great love towards the thirumEni (divine form) of namperumAL and ranga nAchchiyAr. Once bhattar recites some pAsurams and its meanings in front of periya perumAL who gets very pleased and says “you are given mOksham now”. bhattar becomes so happy but tells namperumAL that if He doesn’t appear as namperumAL in paramapadham, bhattar would make a hole and jump out of paramapadham and come back to SrIrangam. Once when ananthAzhwAn asked bhattar if paramapadhanAthan has 2 hands or 4 hands, bhattar replies if He has 2 hands, He will look like periya perumAL and if He has 4 hands, He will look like namperumAL. bhattar could not think of looking at anybody else other than namperumAL. He relates all dhivya thirumEni of perumAL to namperumAL. As namperumAL gives him mOksham, bhattar, with the blessings of his mother ANdAL, leaves this world and joins the other AchAryas in paramapadham, to do nithya kainkaryam to emperumAn. He passes the torch of our srIvaishnava SampradhAyam to nanjIyar who becomes the next AchAryan.

aththuzhAy : pAtti, bhattar’s life is so interesting to listen to. The devotion that he seems to have had for namperumAL and their bond is so heart touching. So blessed was ANdAL to have such illustrious husband and sons.

pAtti : You are very right aththuzhAy. ANdAL was very blessed indeed. Tomorrow , I will tell you more about nanjIyar, the next AchAryan. Now take these fruits and go home.

The children leave to their homes thinking about bhattar and his divine life.