pAtti : Welcome children. Today we will talk about the next AchAryan nampiLLAi who was the Sishya of nanjIyar. As I already told you last time, born as varadharAjan in nambUr, nampiLLai was a scholar in both thamizh and samskritham language and literature. We also know how nanjIyar wanted to make copies of his 9000 padi vyAkyAnam and varadharAjar’s name was proposed due to his proficiency in both the languages. It was nanjIyar who named varadharAjar as nampiLLai after seeing and understanding his true glories. nampiLLai is also known as thirukkalikanRi dhAsar, kalivairi dhAsar, lOkAchAryar, sUkthi mahArNavar, jagathAchAryar and ulagAsiriyar. 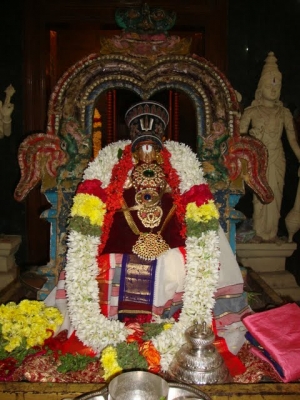 vyAsa : pAtti, we also remember how nampiLLai rewrote the entire 9000 vyAkyAnam from his memory after he lost his AchArya’s original copy in the floods of river kAvEri.

pAtti : Yes, in spite of such greatness and knowledge, nampiLLAi was very humble and treated everyone with great respect and affection.

vEdhavalli : pAtti, can you tell us some incidents highlighting nampiLLai’s glories?

pAtti : After learning AzhwAr’s pAsurams along with their meanings from nanjIyar, nampiLLai was regularly lecturing at the eastern side of perumAL sannidhi in SrIrangam temple. nampiLLai could attract a huge crowd due to his great command over thamizh and samskritham language and literature. He was also an expert in giving satisfactory reasoning using vAlmIkI rAmAyaNam whenever a doubt/question arises in the minds of people. Once, when nampiLLai was giving his upanyAsam, periya perumAL (mUlavar in SrIrangam) stood up from his reclining position and tried to watch nampiLLai’s upanyAsam. thiruviLakku pichchan (a SrIvaishnava who took care of the lamps and lighting in the sannidhi) looked at periya perumAL in standing posture and asked him to get back to his lying posture saying that he cannot move in archAvathAram. emperumAn even broke his archA samAdhi (The promise not to move or talk in archAvathAram) to watch and listen to nampiLLai. Such was the attraction of nampiLLai’s upanyAsams. Because of his in-depth knowledge in various literature in both thamizh and samskritham he was able to mesmerize his audience during his lectures. He was able to attract people to his lectures just like namperumAL was able to attract people with His charming nadai (walk) during his purappAdu (procession) and His beautiful thirumEni which attracts the devotees from all corners of the world. Has anyone seen namperumAL’s purappAdu in SrIrangam? 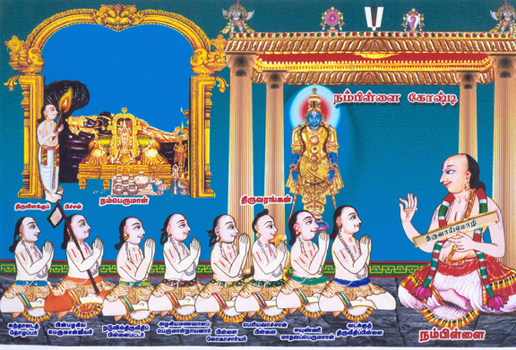 aththuzhAy : yes pAtti, I have. I went to SrIrangam on one of the brahmOtsavams when perumAL had veedhi purappAdu ( procession in streets) and the way He walked was mesmerising.

parAsara : Yes pAtti, we too have watched namperumAL’s purappAdu many times.

pAtti : Who wouldn’t have? Isn’t it a treat to our eyes? Just like how namperumAL attracted all his devotees with his purappAdu, even nampiLLai attracted a huge crowd to his upanyAsams. In spite of all this, his humility was unparalleled. Once in front of namperumAL, kandhAdai thOzhappar (who comes in the lineage of mudhaliyANdAn) utters few harsh words towards nampiLLai. He was not able to appreciate the glories of nampiLLai and that came out as harsh words. nampiLLai without saying a word, accepts the insults, leaves the temple to go to his thirumALigai (home). When thOzhappar went to his thirumALigai, his wife who had already heard the news from others, gave him strong advice on his behaviour and explained the glories of nampiLLai. She insists that he should go and apologize at the lotus feet of nampiLLai. Finally he realizes his mistake and decides to go to nampiLLai’s thirumALigai late in the night. When he opened the door to go, he noticed that there was a person waiting there and that was none other than nampiLLai himself. nampiLLai seeing thOzhappar, immediately falls down and offering his praNAmam and says that he had committed some mistake which caused thOzhappar to be upset with him. thOzhappar was shocked to see nampiLLai’s greatness – even though it was thOzhappar who committed the mistake, nampiLLai was gracious enough to take up the fault on himself and apologise. thOzhappar immediately offered his praNAmams to nampiLLai and said from then on nampiLLai will be called “lOkAchAryar” (teacher for the entire world) because of his great humility. He said only some one with great humility even after being such a great personality can be called lOkAchAryar and nampiLLai fully fits that position. thOzhappar also gives up his hatred towards nampiLLai and starts serving nampiLLai with his wife and also learns all the meanings of SAsthram from him.

parAsara : How wonderful! Isn’t it very similar to the incident where parAsara bhattar gifted an expensive shawl to the person who talked ill of him?

pAtti: Good observation parAsara! Our pUrvAchAryas all had similar qualities – that of a true SrIvaishNava. Time and again, our AchAryas taught us how to live and stressed on how to treat everybody by leading a pure life of a SrIvaishNava. They showed us the path by being perfect examples. They also showed us that it is not just theoretical but can be followed even practically. All it needs is one’s AchAryan’s blessings and little effort from our end to try to live a life like our pUrvAchAryas. Little baby steps will eventually lead us to our destination.

When bhattar showed us how to be a true SrIvaishNava, naduvil thiruvIdhip piLLai bhattar who came in the lineage of parAsara bhattar, developed some jealousy towards nampiLLai. Once naduvil thiruvIdhi piLLai bhattar was going to the king’s court with pinbhazhagiya perumAL jIyar along with him. The king invited both of them, gave them sambhAvanai and offered them nice seats. The king asked bhattar a question from SrI rAmAyaNam. He asked when SrI rAma always presented himself as a human in rAmAvathAram and never once did he call himself paramAthmA, how could he say to jatAyu that he is given mOksham? bhattar asks jIyar how nampiLLai would have explained this and jIyar immediately says that nampiLLAi would explain it as “a truthful person like rAman can conquer all the worlds with the power of his honesty” quoting the principle from SAsthram. bhattar uses the same explanation to answer the king’s question. The king being very pleased with the explanation, praised bhattar for his knowledge and presented him huge wealth. bhattar immediately realizing the power of just one explanation of nampiLLai, goes to nampiLLai and offers all the wealth to him. He also surrenders to nampiLLai and becomes a disciple of him and thereafter serves nampiLLai forever. Thus naduvil thiruvIdhip piLLai bhattar was redeemed and becomes one of the many Sishyas of nampiLLai.

vEdhavalli : pAtti, last time you said that bhattar and najIyar had great conversations between each other. Did nanjIyar and nampiLLai also have such interesting conversations?

pAtti : Yes vEdhavalli. nanjIyar and nampiLLai also had wonderful conversations. Once, nampiLLai asks to nanjIyar, “what is the purpose of avathArams (incarnations) taken by emperumAn?”. nanjIyar replies that “emperumAn took the avathArams with the main purpose to ensure that one who committed bhAgavatha apachAram is punished appropriately”. For eg. emperumAn took krishNAvathAram to ensure that dhuryOdhanan who committed many apachArams on his bhakthas gets killed eventually. He came as narasimhan to ensure that hiraNyakaSipu, who troubled His devotee prahlAdha, is killed. So, the main motive of all avathArams is bhAgavatha samrakshaNam.

vyAsa : pAtti, what is bhAgavatha apachAram?

nampiLLai also made it very clear that going and praying to other demi-gods and goddesses known as dhEvathAnthara bhajanam is completely meaningless.

aththuzhAy : pAtti, how did nampiLLai explain it?

pAtti: Once, someone came to nampiLLai and asked, “you are worshipping dhEvathAntharams (like indhran, varuNan, agni, sUryan, etc) in your nithya karmas, then why do you not worship them in their temples?”. nampiLLai gives an instant and brilliant reply. nampiLLAi asked, “Why do you worship the fire in yagyam and stay away from the same fire in a burial ground? The same way, since SAsthram says nithya karmas must be performed as bhagavadhArAdhanam (worship of bhagavAn), keeping that emperumAn is antharyAmi for all the dhEvathAs, we do it. The same SAsthram says we should not worship anyone but emperumAn, so we don’t go to other temples.

vEdhavalli: pAtti, my mother says this is a very sensitive topic and not many accept this thought.

pAtti: Some truth, when said, are like bitter pills to those who deny to realise and accept it. However, like bitter pills do good to your body, this truth does good to your soul and body. The authenticity of vaidhika truth can never be denied or proved otherwise just because people do not want to accept it. With one’s own AchArya’s blessing and emperumAn’s causeless mercy, everybody will realise this truth eventually. As AzhwAr says in one of his pAsurams, “If everybody realise the eternal truth of SrIman nArAyaNan’s supremacy and reach mOksha, then there will be no world for the lord to play His divine pastimes, hence this delay”. AzhwAr also says “realise this trick and immediately run towards thirukkurugUr and surrender to the lotus feet of AdhippirAn perumAL”.

vyAsa: pAtti, did nampiLLai get married?

pAtti: yes, nampiLLai had two wives. He once asked one of his wives how she thinks of him. She replies that she considers nampiLLai to be an avathAram of emperumAn and treats him as her AchAryan. nampiLLai was very pleased and asks her to be engaged in thadhiyArAdhana kainkaryam (preparation of food) fully for the SrIvaishNavas who visit nampiLLai regularly. nampiLLai showed the importance of AchArya abhimAnam (respect) with this incident.

parAsara: pAtti, nampiLLAi’s life is so interesting to listen to. He must have had such great Sishyas! 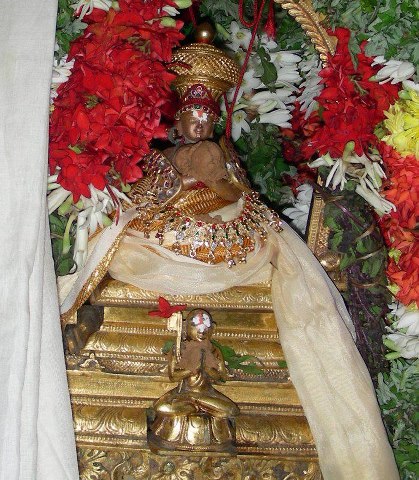 Next time when we meet, I will tell you about these Sishyas of nampiLLai , who with his boundless mercy, went on to provide great granthams and do marvellous kainkaryams to our sampradhAyam.

The children leave to their respective homes thinking about nampiLLai’s glorious life and his teachings.