parAsara and vyAsa enter AndAL pAtti’s house. They were accompanied by their friends vEdhavalli, aththuzhAy and SrIvathsAngan.

pAtti (smiling) : Come in children. vyAsa, looks like you have brought all your friends as I had said yesterday.

vyAsa : yes pAtti, parAsara and I were telling the stories of rAmAnujar and his AchAryas to SrIvathsAngan and he wished to join us today to listen more from you.

pAtti : That is great. Come, sit. Today I will tell you all about thirukkachchi nambi and thirukkOshtiyUr nambi, the two great AchAryas of rAmAnujar who hold a very special place in the sampradhAyam.

SrIvathsAngan : pAtti, thirukkachchi nambi was born in a place called pUvirunthavalli near Chennai, on the way to SrIperumbUthUr. We visited that temple last year during our summer holidays.

pAtti : On being requested by rAmAnujar for proper guidance, thirukkachchi nambi asks rAmAnujar to bring theertham from sAlaik kiNaRu (a near-by well) for perumAL thirumanjanam. That was the first kainkaryam bestowed upon rAmAnujar by thirukkachchi nambi. His knowledge on SAsthram and his love towards emperumAn was par excellence. rAmAnujar develops such immense affection and respect towards thirukkachchi nambi that he requests him to accept rAmAnujar as his shishya and perform pancha samskAram.

parAsara : But, pAtti, didn’t you say that periya nambi did pancha samskAram to rAmAnujar in madhurAnthakam?

pAtti : Yes parAsara. I’m happy that you remember the incident. thirukkachchi nambi, a scholar in SAsthram, was well aware that he cannot perform pancha samskAram to rAmAnujar based on the restrictions specified in SAsthram. He explains the same to rAmAnujar who accepts it as it is said in SAsthram. This shows the respect and unwavering belief that rAmAnujar had on the sanctity and righteousness of our SAsthram. He believed, like all our AchAryas that if it is said in SAsthram , it is right beyond any question or doubt as SAsthram is none other than God’s own words and will. thirukkachchi nambi also guided rAmAnujar through all his doubts and questions related to our sampradhAyam. There is a very interesting story of how thirukkachchi nambi conversed with dhEva perumAL to clarify rAmAnujar’s doubts.

vEdhavalli : What were the doubts pAtti? What did dhEva perumAL say?

pAtti : Once rAmAnujar had few confusions and doubts in his mind. He knew that thirukkachchi nambi could converse with dhEva perumAL, he requested nambi’s guidance once again. Nambi goes to emperumAn and performs his kainkaryam as usual and waits for the right time to open up about rAmAnujar’s request. dhEva perumAL, enquires about nambi’s hesitation. Nambi reveals that rAmAnujar has few doubts to be clarified. Nambi had no idea what the doubts were but dhEva perumAL being the antaryAmi of all, the ever merciful emperumAn states, ” Tell rAmAnuja that 1) I’m the supreme of all, no doubt 2) I’m the one residing in all living and non-living things as antharyAmi but that doesn’t make them equal to me. They are different from me and always are subservient to me 3) Accepting me as the only refuge is the only way to understand and attain me 4) Once surrendered, I will, without fail, remember and take care of my bhakthas during their last moments 5) Once my bhakthas  leave this world, I will give them eternal kainkaryam in my abode, SrIvaikuNtam and finally 6) Accept periya nambi as his AchAryan. Neither did dhEva perumAL ask what rAmAnujar’s doubts were nor did Nambi know what the doubts were. When nambi goes back to rAmAnujar with these answers, rAmAnujar’s happiness knew no bounds. Such was the mercy of dhEva perumAL. He was always there when rAmAnujar had doubts or fear of any kind. Now that it became very clear that rAmAnujar must approach periya nambi for samASrayanam, he takes the blessings of thirukkachchi nambi and leaves to SrIrangam to meet periya nambi and we all know the rest of the story, isn’t it children?

pAtti : One of the very important characteristic qualities of a SrIvaishNava is humility, often referred to as naichya bhAvam or feeling humbled in the presence of other SrIvaishNavas, in our sampradhAyam. periya nambi was a living example of humility which came genuinely from his heart and were not just words from his mouth. periya nambi was very humble and always treated other SrIvaishnavas with great respect. One very interesting incident happened which proves this. There was once a great AchArya called mARanEri nambi who was also a disciple of ALavandhAr like periya nambi. mARanEri nambi wanted his last rites to be performed by a SrIvaishNava and requested periya nambi to take care of the same. periya nambi gladly agrees to it and faces the wrath of the local people in the town for performing the last rites of a person who is lower to periya nambi by caste and thereby going against SAsthram. When asked, periya nambi says that he was just following the teachings of nammAzhwAr who says that bhAgavatha kainkaryam is of utmost purity and importance. A bhAgavatha, irrespective of caste or birth, must be treated with respect. The naichya bhAvam was not theoretical but put into practise by periya nambi. He truly believed that all SrI vaishnavAs are dear to emperumAn and must be revered and respected. He also believed that no matter where and how a true devotee of emperumAn spends his last moments, emperumAn gives them the eternal bliss of kainkaryam in SrI vaikuntam, just as assured by dhEva perumAL to thirukkachchi nambi. He was a great AchArya who lived by the teachings of his AchArya, AlavandhAr, and nammAzhwAr throughout his life. Is it enough for today or do you want to listen about thirukkOshtiyUr nambi also? 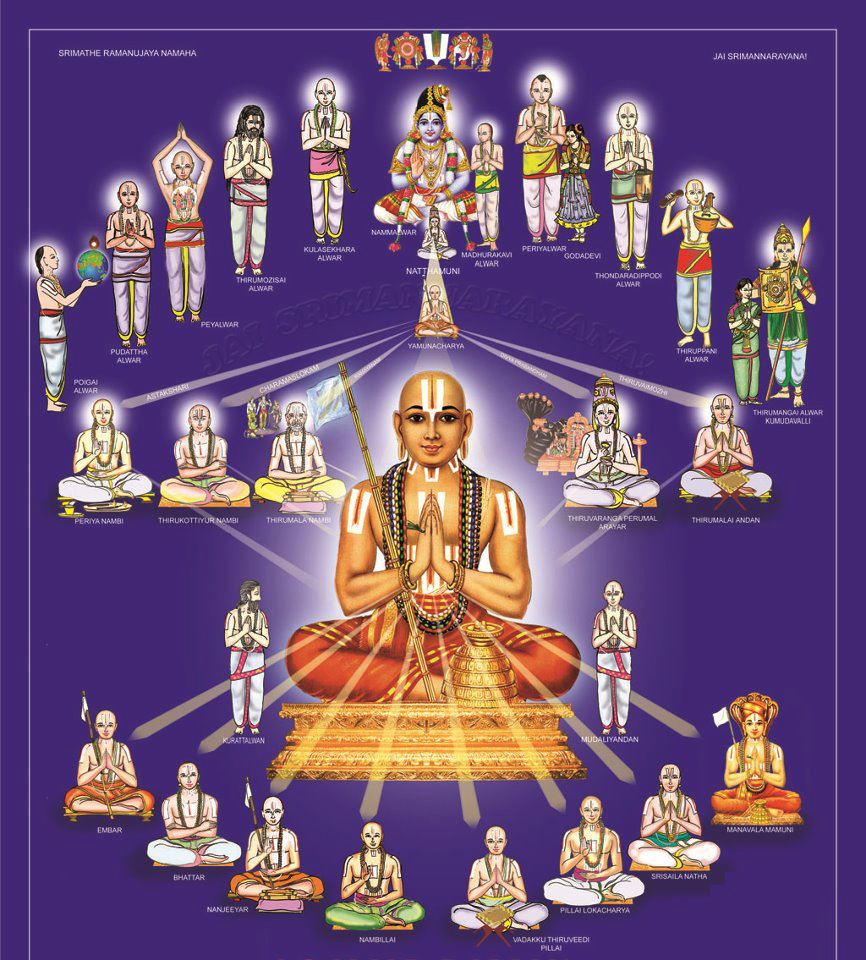 vEdhavalli : Do you have stories about him too?

pAtti : thirukkOshtiyUr nambi was also one of the prominent Sishyas of ALavandhAr who was given the responsibility to teach the meanings of thirumanthram and charama SlOkam. Do you know what they are?

pAtti : Quite impressive. Now these three verses have such deep and profound meanings that one needs to learn it thoroughly from an AchAryan.

vEdhavalli : But pAtti, most of us know the meanings of these verses.

pAtti: yes, most of us know the generic meaning of these verses but each of these carry such in-depth essence of our sampradhAyam that it is beyond one’s capability to know it completely without the blessing and guidance of an AchAryan. That is why thirukkOshtiyUr nambi was given the important task of teaching rAmAnuja the meanings of these verses.

aththuzhAy : pAtti, I heard that rAmAnujar had to travel 18 times to learn from thirukkOshtiyUr nambi. Is that true? Why did he have to go through so much trouble?

pAtti : Yes, it is very much true. It can be taken as a way used by thirukkOshtiyUr nambi to test rAmAnujar’s involvement and sincerity in learning about our sampradhAyam and it can also be taken as a testimony to rAmAnujar’s perseverance and patience. When we face difficulties, we must face it and overcome the hurdle with patience and not give up easily. Look how many times rAmAnujar had to travel to thirukkOshtiyUr. 18 times! He was steadfast and finally, the 18th time he was taught the rich meanings of charama slOkam by thirukkOshtiyUr nambi.

vyAsa : pAtti, thirukkOshtiyUr nambi seems to be a very strict AchArya. He could have been more kind towards rAmAnujar.

pAtti : This is the exact misconception that all have after learning about this incident. But it is not true. He always had rAmAnujar’s welfare in his mind and although he seemed strict outwardly, he was very kind and loved rAmAnujar. Just like a doting father would seem to be strict with his son but would do any kind of sacrifice for the son’s welfare. Remember, yesterday when talking about thirumAlai AndAn, I said there were few differences of opinions between AndAn and rAmAnujar? It was thirukkOshtiyUr nambi who intervened and resolved the conflict amicably for the sake of rAmAnujar. In fact, he was so impressed by rAmAnujar’s selfless love for other SrI vaishnavAs that he lovingly bestowed the name emperumAnAr ( someone who is greater than emperumAn Himself) to rAmAnujar. Thus came the beautiful name “emperumAnAr” to rAmAnujar . When rAmAnujar was poisoned by some miscreants in SrIrangam, it was thirukkOshtiyUr nambi who came in time and appointed kidAmbi AchAn to prepare food for rAmAnujar so that his life is safe. thirukkOshtiyUr nambi was always concerned about rAmAnujar’s well-being just like a loving father. There are so many more stories on his greatness, abundance of knowledge and his devotion towards his AchAryan AlavandhAr. I would love to keep telling you stories and I’m sure you all would love to keep listening to them but don’t you think your parents will be worried that you all are getting late? Now take these fruits and go home. Next time, I will tell you many such stories about our AchAryas.

The children share the fruits and leave, thinking about thirukkachchi nambi, periya nambi and thirukkOshtiyUr nambi.